Have you joined the award-winning #CSUWarOnWaste?
Share:FacebookTwitter
LifeNews & events

Have you joined the award-winning #CSUWarOnWaste? 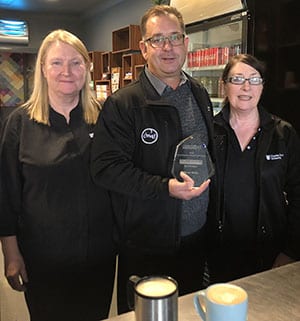 Congratulations to everyone at Charles Sturt University for their amazing effort in joining the #CSUWarOnWaste.

By getting involved in new and exciting initiatives such as bringing your Keep Cup for your morning coffee, learning to sew at Boomerang Bag sewing bees and ditching plastic straws we are working together to become more sustainably aware.

In recognition of our efforts the CHEERS team who have been proactively leading the “War on Waste” initiative recently received the prestigious Tertiary Access Group (TAG) award for ‘Best Commercial Retail Campaign’ on behalf of CSU! You’ve all been so fantastic, so keep up the fight in 2018.

“Finding ways to target specific marketing and financial incentives for customers helped with their behaviour change. It has also helped avoid over 38,000 disposable cups being sent to landfill in 2017,” said Manager of Food and Beverage Services, Brett Russell.

The War on Waste initiative was rolled-out across nine of CSU’s food outlets operated by CHEERS on five campuses (Albury-Wodonga, Bathurst, Dubbo, Orange and Wagga Wagga). Following its launch in August, it has become well established and continues to increase awareness among staff, students and visitors to CSU’s campuses.

Another big congratulations to CHEERS, CSU Green and all members of the CSU community for creating a positive change, let’s keep it up!