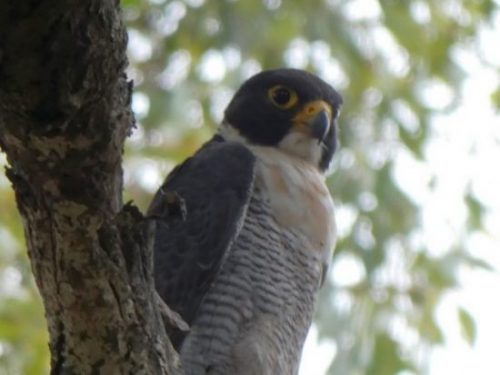 Across the Charles Sturt University campuses, there are a lot of interesting buildings. Some are named after very important people in our history, some commemorate special moments and some are there to provide us with a good time, but none are quite like this structure.

While it may just be a water tower located on the Orange campus, the water tower is the home to a family of peregrine falcons. The special thing is you can watch their daily activities courtesy of the FalconCam Project.

The FalconCam Project was established in 2007 by Dr. Cilla Kinross to study, monitor and record the breeding & natural behaviour of this peregrine falcon family. A roosting box was mounted and the falcons took to it straight away and made it their home.

Important information on the breeding, behaviour and diet of this iconic species is being collected for publication in the near future.

There are three cameras for you to watch. There is one inside the box above the floor. One is up high overlooking the ledge of the roosting box where you can see their flight approach. The third one (the new ‘box cam’) has very high resolution and provides overall coverage of the nest box and its approach.

Each breeding season is variable, but usually starts around mid-August and finishes when the last fledgeling leaves the area between January and April.  Since 2008 the project has seen many new juvenile peregrines start their long life, and naturally, each new youngster has been given a name. Migii was the first and named after a lightning strike that hit the box in 2008. Then we met Solo, Tardy, Walga, Tumbler and many others. This year there was only a solitary male named Izzi and he is still visiting the box daily.

So if you love birds or animals in general and you want to check out something awesome, make sure you visit the YouTube livestream.

If you are out and about on the Orange campus, take a moment to look up at the top of the tower where the birds can often be seen live.

The project is run by donations through the CSU Shop.  All financial help, however small is most welcome. You can donate online.

For more information on this project, you can contact the project coordinator, Adjunct Lecturer Cilla Kinross via ckinross@csu.edu.au or by phone on 02 6365 7651.