Stan Grant’s reflection on the importance of language 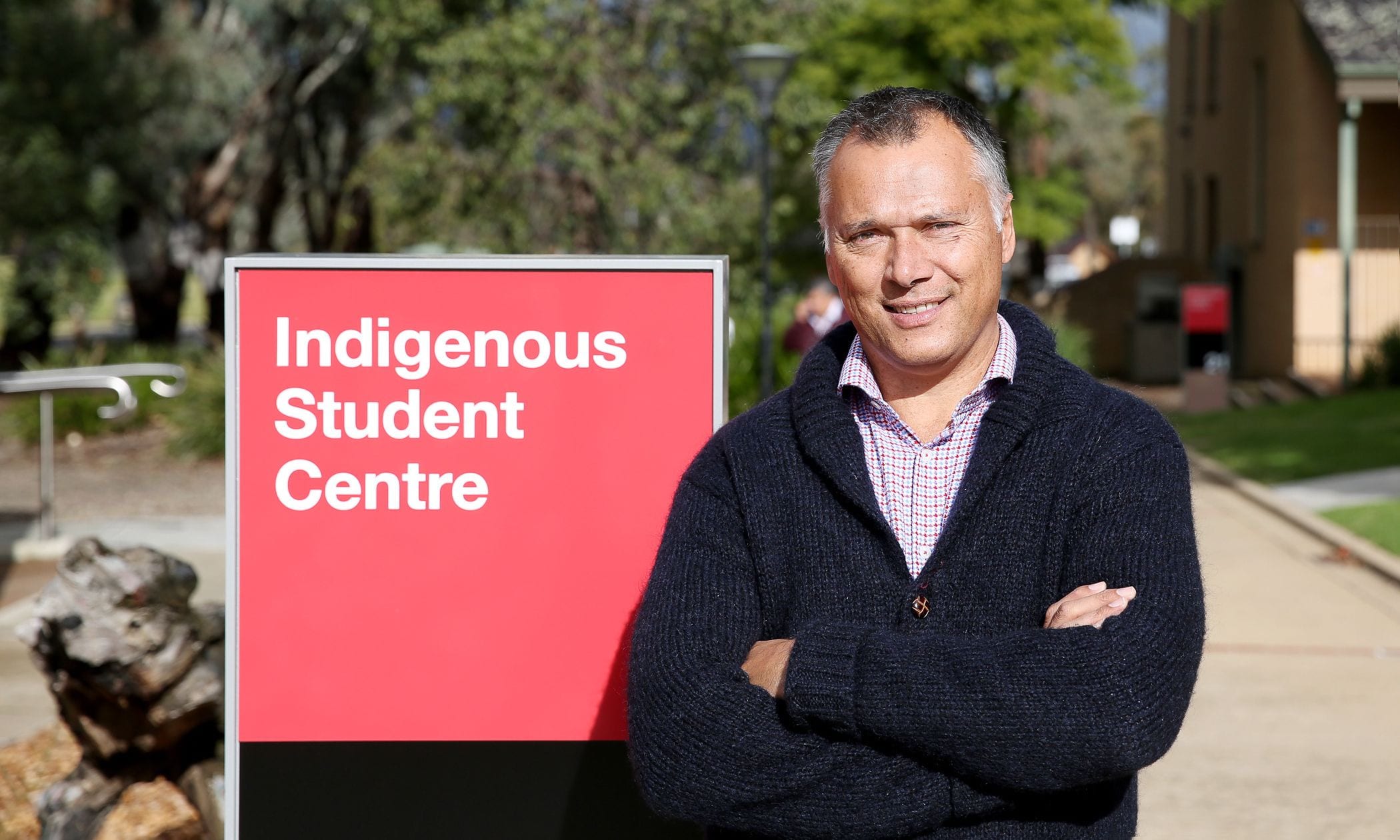 If you didn’t already know, it’s NAIDOC Week! In light of the celebrations, Chair of Indigenous Affairs at CSU, Dr Stan Grant Jnr, provided his thoughts on the importance of lndigenous language for all Australians. Read on!

How reassuring those words sound to me. They feel right. They connect me to a deep ancestry, a tradition and a sense of place that anchors me still.

I am a Wiradjuri man. I am proud to be Wiradjuri.

Terra nullius gave the British licence to write their own story here. In her book Being Australian, sociologist Catriona Elder speaks of the ‘terra nullius narrative’ – a white story written in an empty space. Elder says the ‘terra nullius story meant non-Indigenous peoples could imagine they were telling a story where no other story existed’.

It is a story that did not include us. Our presence countered the European claim on this land, we were a reminder of a deeper sense of belonging here. As such, we were depicted as the ‘noble savage’ or a ‘doomed race’ bound for extinction; as Elder says, a people who ‘could not survive the inevitable onslaught of a modern world’.

Speaking our languages forces Australia to see us.

Australia in many ways remains perplexed by our survival. Extinction, segregation, assimilation, have all been predicated on our disappearance – fading away on the margins or ‘absorbed’ into the Commonwealth. Elder says ‘Indigeneity or blackness is excluded from the nation by Indigenous peoples being made white’. What remains is an enduring and frustrating question of authenticity. Who are the ‘real Aborigines’?

Australia has turned itself inside out defining and redefining us. The Australian Law Reform Commission lists 64 different definitions of what it is to be Indigenous.

Indigenous identity is the most politicised in Australia. The binary of authentic and/or inauthentic is a trap. Anthropologist Elizabeth Povinelli says Indigenous Australians are forced ‘to identify with the impossible object of an authentic identity’.

Povinelli probes this dilemma in her book The Cunning of Recognition. She looks at the process of recognition – legally, socially, historically – and asks what is the nation recognising as it ‘tries to develop its worth without subjecting itself to the throes of contestation and opposition’.

Povinelli wonders how Indigenous people fare in a liberal-multicultural society. She looks at how native title demands a legally provable authenticity – an unbroken and ongoing connection. Customary law, she writes, is vital to determine a successful native title claim but it has its limits ‘real customary being must be free of any sense of a repugnant that would “shatter the skeletal structure” of state law’.

Put simply, prove you’re Aboriginal but not too Aboriginal; those Indigenous customs must exist within Australian law, not upend it.

Liberalism sets its own limits. It operates on the one hand by rational thought and reasoning, yet it is constrained by what it considers morally acceptable (or unacceptable). Society rejects those things it deems abhorrent, yet as Povinelli points out it is challenged too by those differences ‘too hauntingly similar to themselves to warrant social entitlements’. Her example is a land claim by Indigenous people who ‘dress, act and sound like the suburban neighbours they are’.

In a multicultural society Indigenous people feel the strains of belonging and yet expressing difference. The state frames those customs and laws of Indigenous society that it finds worthy, and Aboriginal people must identify with that to – as Povinelli says – ‘gain access to public sympathy and state resources’. Here is the ‘cunning of recognition’, an act of acknowledgment that may be more about protecting and enhancing the honour of the society than in truly seeing the very people it is mean to be recognising.

So, where are we? Indigenous people have been framed by terra nullius, locked in the imagination of an Australia that has often throughout its history found the black presence uncomfortable or offensive, and now must prove their authenticity. Australian society sets the boundaries.

As an Indigenous person – Wiradjuri/Kamilaroi – I feel acutely the tension between belonging to Australia and expressing difference. I could say I am Australian, I am proud to be Australian. I certainly acknowledge my country, my nation. I am proud of the things Australia represents but still, I stop short.

There is an ambivalence to my relationship with Australia. I can enjoy its gifts but allegiance can feel like compromise. I have what black English scholar Paul Gilroy has called a ‘convivial approach’ to life in my country; my friendships and attachments are meaningful and enduring. But being Wiradjuri is unconditional.

I am far from fluent in my father’s language and that is the legacy of our history; a history of culture destroyed or denied. My father, Stan Grant senior, as a young boy saw his grandfather Wilfred Johnson jailed for speaking it to him in the main street of town.

But there is a resurgence of language as an expression of belonging and an act of defiance in the face of assimilation. My father has devoted much of the later years of his life to reviving Wiradjuri. With linguist John Rudder, he wrote the first Wiradjuri dictionary. He has taught the language and inspired a new generations of teachers. Charles Sturt University now offers a graduate certificate in Wiradjuri language, culture, and heritage.

My father says language does not so much tell you who you are but where you are. It is a crucial distinction. It speaks to something psychologist Carl Jung once wrote; ‘land has soul; it assimilates the conqueror’.

Jung saw enduring power in energy; ‘energy never vanishes…it does not cease to exist when it disappears from consciousness’.

Australian scholar David Tacey was inspired by Jung for his book Edge of the Sacred. Tacey saw a need for the ‘soul to be returned to the world’.

Tacey suggests the ‘land might be influencing us at more subtle levels’ and Indigenous people represent an enduring connection. As he points out ‘the nation may be new but the land itself is ancient and powerful’.

Artist Jonathon Jones drew on this for his exhibition last year on the shore of Sydney Harbour. It was the focus of a recent ABC TV documentary. The artist evoked a world of loss and memory, a world both familiar and yet strange.

Jones, a Wiradjuri/Kamilaroi man, recreated a part of Australia long gone, and reclaimed it as sacred space. This wasn’t simply Indigenous space; Jones opened a tear in our universe that would allow us all to find new meaning in what it is to belong.

Jones provided a window into the missing piece of our national narrative. As Indigenous leaders seek meaningful political change, the artist reminded us that we need also a story that binds us all to this land.

The documentary Palace of Memories followed Jones as he exhumed what was once a 19th century palace on the shore of Sydney Harbour. This grand building once announced Australia to the world, drawing international guests to an exhibition of this emerging nation.

The exhibition contained many indigenous artefacts specifically weapons and shields. Soon after, the palace burned to the ground. Today it is barely remembered.

Jones reconstructed the site using shields to mark the boundaries, covering the spaces with grass and filling the silence with indigenous languages presumed to be lost. Jones asked the question: if a nation can so easily erase such a building from its memory, what else can it forget?

He explored how we live with absence and how it informs us anyway. The absent really isn’t absent at all. The artist drew on the power of land and our place in it − all of us.

Jones use of language goes to the heart of what it is to be a nation. Political scientist Benedict Anderson called nations ‘imagined communities’, what he saw as a ‘deep horizontal comradeship’. He traced the emergence of nations out of the secular transformation of 18th century Europe. Anderson argued they were forged around common language groups as ‘old sacred language groups were gradually fragmented, pluralised, and territorialised’.

‘A consciousness of connectedness’, he wrote, ‘emerges, above all when all share a single language of state’. Anderson said that ‘imagined communities’ took flight on the novel and the newspaper. The printing press hundreds of years earlier had already put information into the hands of ordinary people, literacy improved and people began to align themselves around common stories.

It created a potent sense of shared destiny that trumped what we may otherwise have had with our fellow humans. As Anderson wrote, ‘ … one can sleep with anyone, but one can only read some people’s words’.

Language was a potent tool of empire. The dominant language of the coloniser extinguishing those of the colonised as Benedict Anderson wrote, ‘stretching the short, tight, skin of the nation over the gigantic body of the empire’.

Today our politics is dominated by talk of ‘Australian values’, ‘patriotism’; the price of citizenship is the ability to speak English. The resurgence of Indigenous languages is a counter to the triumphalism of the Australian settlement. It is a profound statement of sovereignty – this is, was and always will be Aboriginal land and these are the languages of the land.

Indigenous languages also present a tantalising opportunity for all the people of Australia to find a deeper sense of belonging. The empty space of terra nullius could be filled with the voices of people of all backgrounds speaking the first languages of this land. It is a space to truly build a nation; a nation as it was conceived by the great 19th century French historian Ernest Renan.

Renan dismissed the idea of racial and linguistic bonds. Languages, he wrote, ‘ask to be united, they do not force it’. For Renan, a nation was ‘a soul, a spiritual principle’. It is born of the past ‘a rich legacy of memories’ and the present ‘the desire to live together’.

That is a very different idea of Australia. It is one that comes from traditions of many millennia. It demolishes forever the narrative of terra nullius. It frees us from the destructive hold of assimilation. It says we were here, and remain here. It is carried in the art of Jonathon Jones. It is the dream of people of language like my father.

As historian James Clifford writes in his book Returns: Becoming Indigenous in the 21st Century:

‘Indigenous people have emerged from history’s blind spot. No longer pathetic victims or noble messengers from lost worlds … they struggle within dominant regimes that continue to belittle and misunderstand them, their very survival a form of resistance’.

Dr Grant is Chair of Indigenous Affairs at Charles Sturt University and a leading award-winning Australian journalist and commentator.